So at this point I’m sure you’re wondering just what happened to Sarah Good, Sarah Osborne, and Tituba once they were accused by the girls. Well this is where things start to get a little complicated in terms of facts and dates. Basically a lot of important information starts to overlap, so I will condense the information down as much as possible while trying to keep it in the most chronological order that I can. I will also be cutting out names and details that necessarily partake much to the key points of these events.

So we have three accused ‘witches’ so far, trials that supposedly proved them all to be guilty, and three examinations of the women for ‘signs of witchcraft.’ These examinations were done by Judge John Hathorne and Judge Jonathan Corwin. Fun fact both of these judges have famous, or infamous for one, relatives that I will address in a separate post. Anyways, this ‘examination’ mainly consisted of the judges looking for ‘witches’ markings’ on the bodies of the accused. Witches’ marks were considered marks the Devil placed upon a witches’ body to claim ownership and prove the loyalty the witch has to himself. These marks were a variety of things from warts, birth marks, large beauty marks, or other bumps/imperfections on the body. So basically it was very easy, once accused, for a judge to find anything on a person’s body that could be considered a witches’ mark. Finding one of these marks was basically one of the final steps of condemnation for the accused, and this is what led Sarah Osborne and Sarah Good to jail.

This is where things take a slight plot twist but with a sensible cause. Tituba confesses to 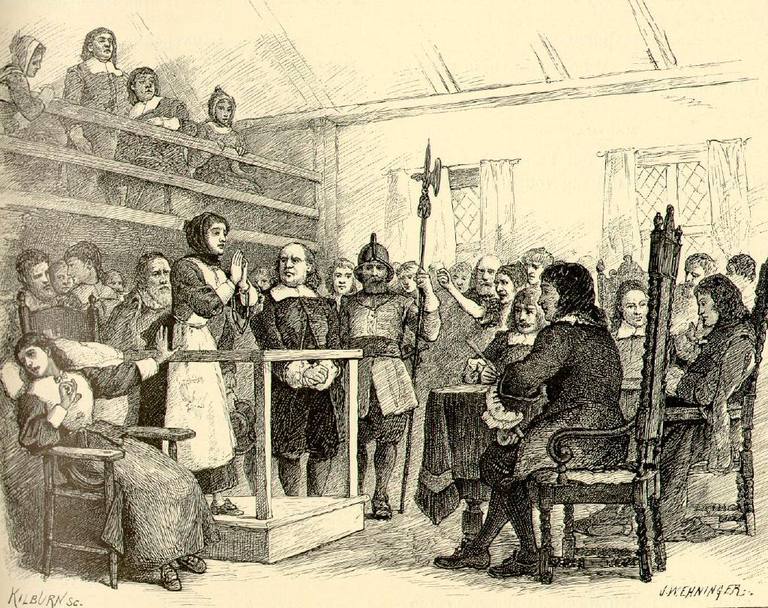 witchcraft. Whether it was to save her own self or at the forceful hand of her owner Samuel Parris for a powerful influential gain, she admits to it. Now a HUGE misconception about the Salem Witch Trials is one I am going to make known right now. The only people who were killed by hanging or pressing during this chaos were those who denied being a witch once accused. It was basically guilty until proven innocent by methods that were not necessarily practical. But, if someone accused of witchcraft were to confess and condemn their own ways and pray their forgiveness to god (thus ‘renouncing’ the Devil), they were spared.

So Tituba confesses to witchcraft. But not only does she confess, but she offers to help the court identify others because in her own words, she stated that there were many other witches among them. At this  very moment, it could be considered a turning point for the trials. What went from an instance of possibly a one time situation, has made a turn for the worst. Now I am not blaming Tituba at all in this situation, she was the victim not the perpetrator. If anything I once again blame Samuel Parris. But, this is where the idea of mass hysteria truly set in. People started distrusting each other and became weary that they may either be accused next be afflicted by those suspected.

At this point in time once these first set of trials occurred, not only was Ann Putnam Jr. showing signs of affliction, but Ann Putnam Sr. too, and Mrs. Putnam and her daughter believed they knew exactly who was causing them, Martha Corey & Rebecca Nurse.

One Reply to “The Salem Witch Trials Pt. 6: Examinations, Admittance, and More Arrests”