Welcome back my spooky travelers to part 2 of The Hauntings of Endicott College! Lets dive right back in and discuss the second most haunted joint over on campus, Winthrop Hall.

Now Winthrop Hall resides across the street from the main Endicott campus, it overlooks one of Endicott’s three gorgeous beaches. Originally built in 1845, it was originally known as the Thissellwood House due to its previous owner, John Thissell. Once purchased by Endicott in 1945, the house was renamed. 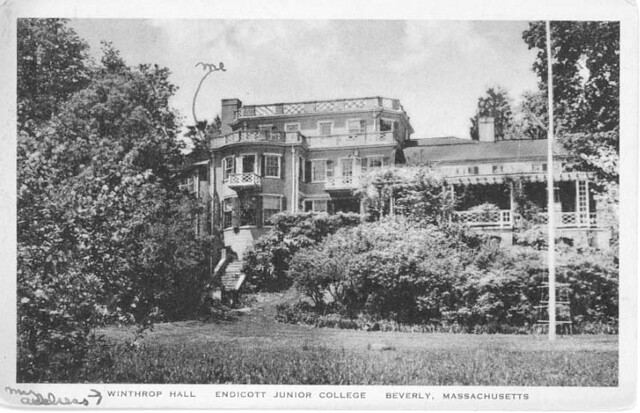 The history for this house is one that lives in both fact and lore. The fact is something I will state first because it honestly does not have much effect on the overarching story line. The basement of the house is blocked off from students in order to preserve history. Not many know, but the basement of the house was once part of the Underground Railroad and acted as a refuge for many slaves escaping to the surrounding areas to freedom. Now no one really knows what happened in that basement so it could very well contribute to the haunts that stick around the place. 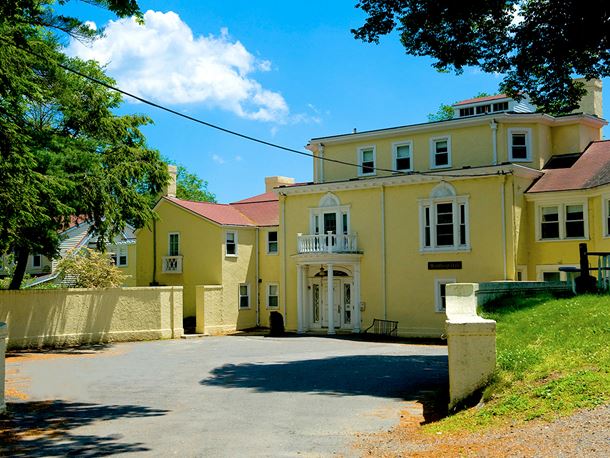 But lets dive into the truly haunting tale that is still known to roam the halls of Winthrop. The supposed story goes as followed: a sea captain and his wife lived at the home. The 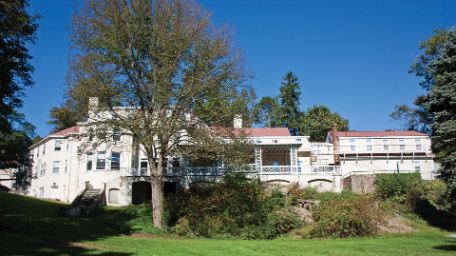 wife loved it because she could always see when her husband went out or arrived home for sea. She would often times be found standing on her widows walk on the roof watching her husband return after a voyage. That was until one day he simply didn’t return at all and never returned again. Heartbroken by her love being lost at sea, she threw herself from the widows walk, falling to her death on the ground below.

It is said that she was very protective of her home and will come to those who ‘hurt’ it. Now when the house became a dorm, the original wallpaper of the house was covered (well get to that later) and a painting from the original owner still remains in the foyer entrance. So lets dive into what exactly is said to go on within Winthrop’s walls.

Winthrop is a freshman dorm at Endicott College (probably because all the other years have learned about its past at that point). Students report hearing noises at night and their shades flying up with nothing around to provoke them. But those are just the minor offenses I guess you could say.

That painting I mentioned that still hangs in the foyer? Ya, its upside down. ALWAYS. The

will be rearranged while no one was present. Campus security officers have reported being called by students claiming a ghost is present and a Ouija board is known to be kept in the common room on the ground floor of the dorm.

So with all of that thrilling information, shall we get into some personal experiences?? Great. Lets go. So once again I worked at Endicott with a very small team in the summer of 2015. At the time I had just accomplished my freshman year and was going into my senior year whereas most of my counterparts were about to be seniors. I had never entered Winthrop Hall because I lived in a different part of campus, but I had always heard the rumors. Since I was the youngest of the group, I was often times sent on the missions that others were not so fond on doing. I really didn’t mind it, busy work is my life, that was until I was instructed to go into Winthrop alone to count beds.

I was a mix of nerves, excitement, and absolutely freaking out. When I approached the building, I had my master key in hand and was ready to go. Issues part 1 came when a construction worker opened the door for me and I nearly peed myself, issue part 2 was when I realized all the construction workers were leaving and I was being left totally alone (did I mention they were renovation the house and one thing I’ve learned is that ghosts hate renovations).

When I hit the second floor I was met with one long hallway lined with doors. Typical 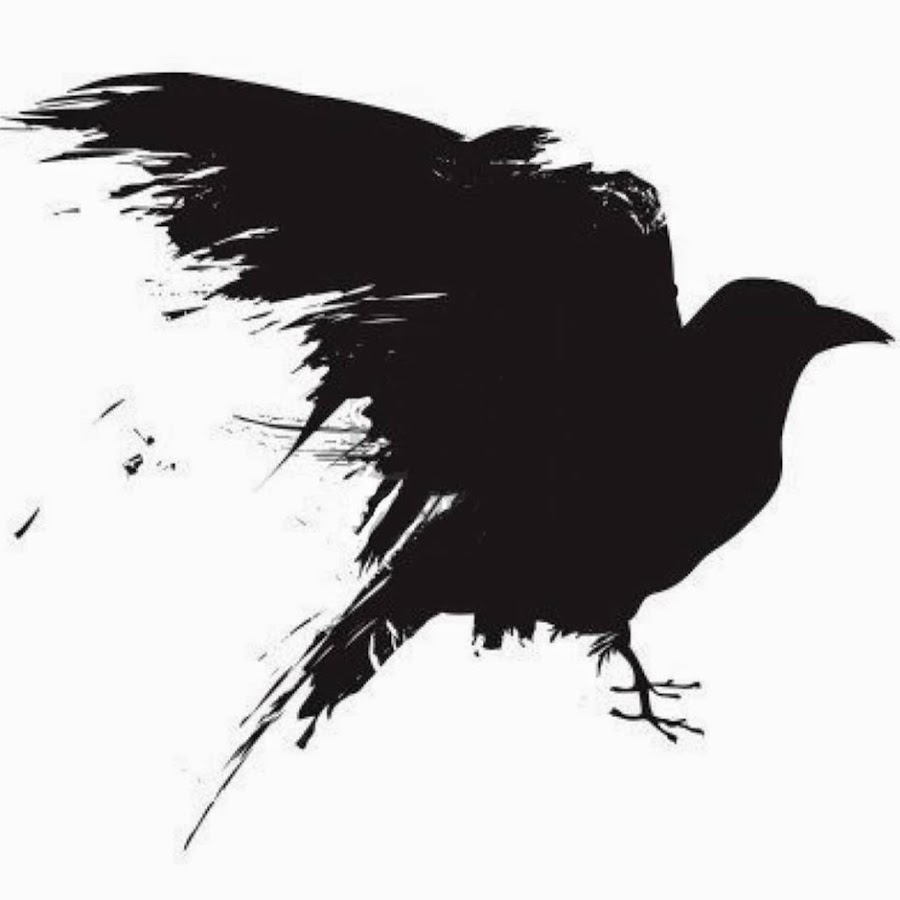 eerie house mood. As I was about halfway down the hall, a door at the end of the hallway slammed shut. I ran to try and find the stairwell up to the third floor to attempt to get out of there as soon as possible and count the beds as quickly as I could. Did I also mention that they have a staircase that leads to a brick wall with a crow spray painted on it instead of accessing the third floor? Guess which staircase I accidentally ran up. Not a fun time. Once I reached the third floor about halfway down my MASTER key suddenly decided to stop working and that’s when I knew it was time for my to nope the heck outta there. So I did and lied about counting. Sorry guys.

Round two came when the construction workers discovered the house’s original wallpaper in the same dorm room that contained the sealed door that led to both the basement and the attic. GREAT STUFF. The summer college student painting team even claimed they had to call security because a woman was seen roaming the house unauthorized. That stories a little fishy and seems too good to be true. But what did happen was one day while half the team was trying to get the gate open to bring in linens to prep rooms, one of my team members and I decided to go into Winthrop to get a head start on unlocking doors to rooms. As soon as we opened the door to the building we heard a huge CRASH come from upstairs which naturally caused us to scream, jump, and shout some words I will not share on here. Then my coworker tried to play it off like it was some left over construction workers but we both knew no one was in there with us. We went up stairs to inspect the damage only to find nothing was on the ground or had fallen. Creepy right? Wanna make it worse? The sound came from the room where the wallpaper was discovered. *drops mic* 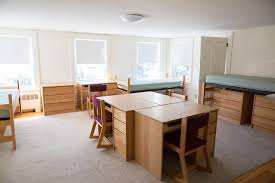 The last two stories will be summarized because the first one could have been a prank and the second one didn’t include me. One day we had just finished collecting laundry from all the room in Winthrop and double checked we got everything. The day before the paint crew thought it’d be funny to mess with the painting and turn it right side up. SO were going about our business and then our boss calls saying we left linens in Winthrop. Strange considering we already checked twice. Anyways, we turned back around only to discover it. Linens. In a pile. In the foyer. In front of the picture. Which was turn back upside down. With the paint team being off that day. Yikes.

Lastly, a friend said some guys in the building got drunk one night and punched a hole in their room wall. Not a good idea. She said she found them huddled together in a corner because all at once everything including their heavy hockey gear fell off one wall in their room (after they punched the wall not because of it). She obvious freaked and had them walk her back upstairs to her room (did I mention her room was the one that the sealed door was in). The strange thing about her room is it was in the only alcove on the floor so you couldn’t see the rest of the hallway from her door. While she was trying to unlock it, all of them heard footsteps running towards them from the other end of the hallway. When they looked, no one was there. The boys ran away. She slept with headphones in the rest of the semester.

Check back in tomorrow to learn about Brindle Hall.