So now that we took the time to learn all about the different kinds of good spirits that accompany the Christmas cheer, let’s dive into some of the eerier. Many know of the stories about Santa, Rudolph, and Frosty, but what about the darker side of the holidays? Better make sure you were good this year, or else you may just be visited by one of these mischievous creatures. 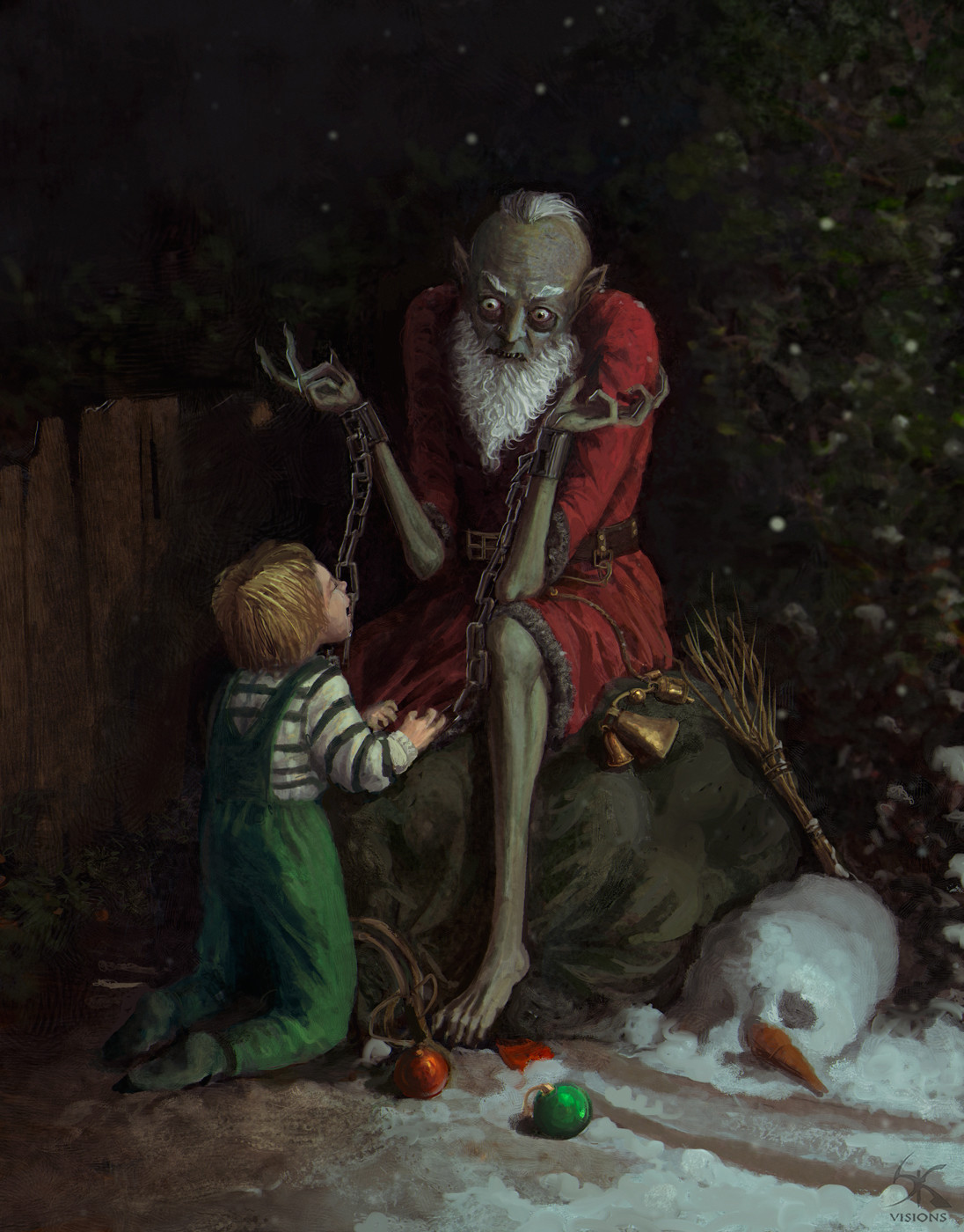 From German and French descent, the tale of Hans Trapp is a little stranger than most of these darker stories. Trapp was considered a wealthy man, but a Scrooge-like figure in the sense that he was a nasty human. It was soon that he sold his soul to the Devil, and lived out his remaining days within the woods. His nasty ways started to gear towards children and it is said that one day he dressed as a scarecrow and kidnapped a small boy in the woods, planning to eat him. That was when God stepped in and decided Trapp needed to chill, so in typical fashion how did he resolve the issue? Well he obviously hit Trapp with a bolt of lightning to stop his evil doing. Now it is said he is trying to redeem his soul by working with St. Nicholas and (still dressed as a scarecrow) encourages (or scares) kids into changing their naughty ways.

Starting in 13th century Norse mythology, Gryla is a giantess from Icelandic folklore. Gryla is described as a grotesque beggar-looking giant woman who use to roam the streets, but instead of begging for money, Gryla begged for children. It is said that she would ask parents to hand over their misbehaved children where she would then take back to her home to eat (children being her favorite meal). In the 17th century the tale started to have a Christmas twist. Nowadays, Gryla has the ability to watch kids year round to make sure they behave themselves. If they don’t? It is said instead of presents on Christmas Eve, they will be met with her grotesque figure whisking them away to be eaten!

Turns out Gryla wasn’t that lonely, and apparently didn’t have an appetite for her own children because that’s exactly who teh Yule Lads are. Yule Lads are a group of 13 beings all with distinguished names and personalities. It is said in the 13 days leading up to Christmas, these Lads are known to reek havoc on misbehaving children. If a child should leave their shoes on their window sill it is said they will soon discover whether or not the Lads believe them to be good or bad. Good children receive presents in their shoes whereas bad receive potatoes. Honestly though, I wouldn’t be that upset with a potato. Turn it into fries. 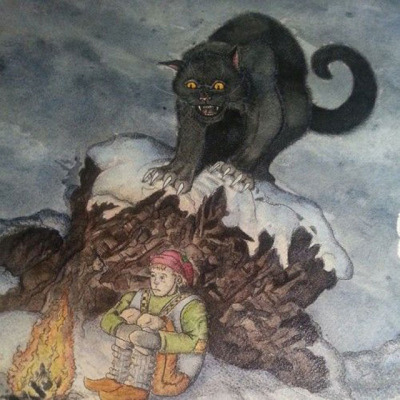 Hey make sure you buy some new clothes for your kids. Just warning you now. Cause if you don’t, the Yule Cat’s comin for them! Another Icelandic legend is that of the Yule Cat who takes children who don’t receive clothes for Christmas. I feel like this is a way for parents to teach their children to be grateful for receiving clothes alongside toys on Christmas. BE GRATEFUL FOR THOSE SOCKS AND UNDERWEAR KIDS.

Probably best known by Dwight from The Office‘s rendition, Belsnickel is like a grungy, dirty version of the big man himself. From southwestern Germany (Germany really seems to like their strange Christmas legends), Belsnickel is known as a gift-bringer to good children. It is said that his dirty, disheveled person will give good kids nuts, fruits, and little cake-like treats that are hidden in his rag robes. But bad children will be whipped and beaten. Casual. Yikes. 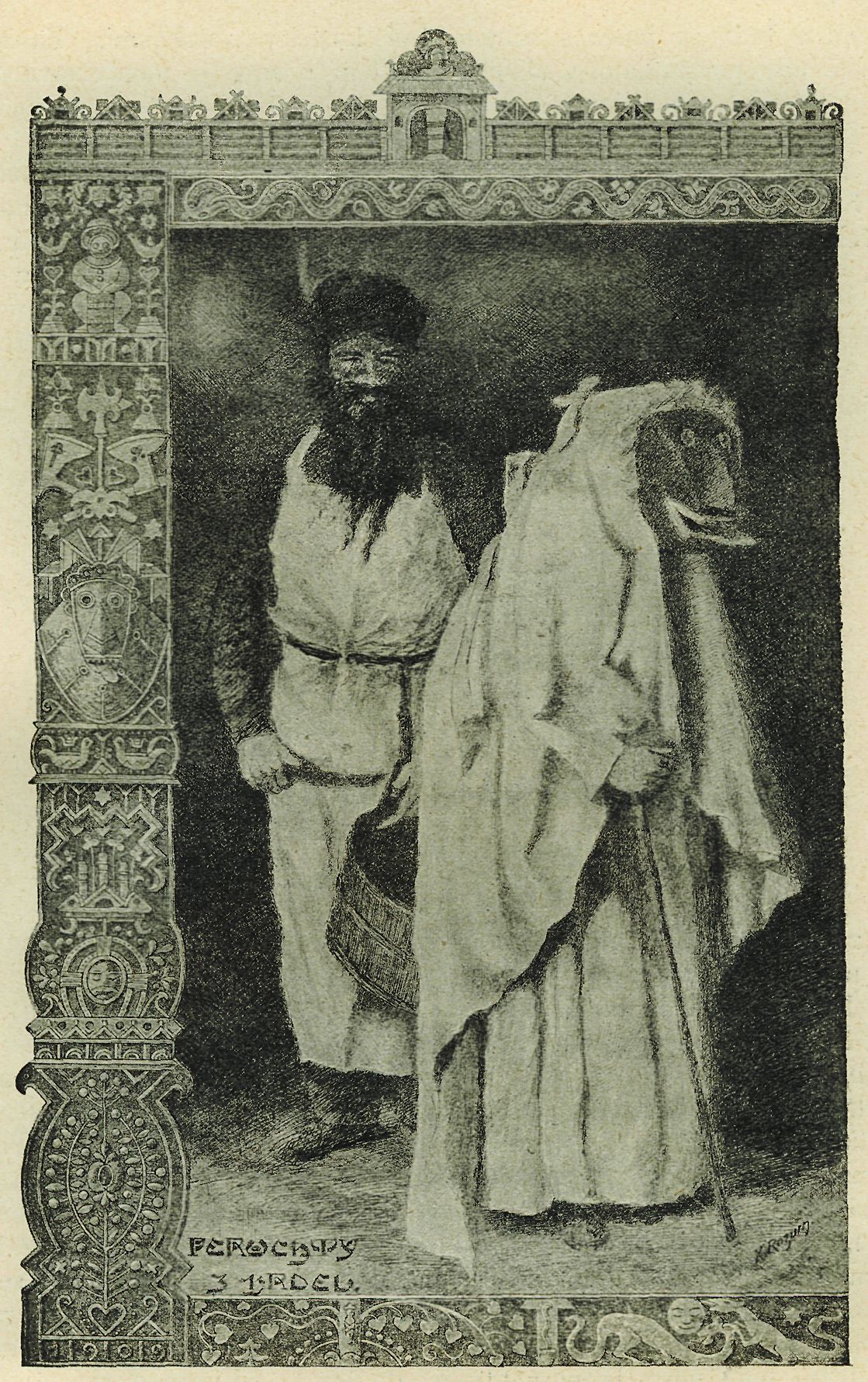 Of German, Austrian, and Swiss descent, Frau Perchta is considered a hunchbacked old hag with a witch-like face. But unlike many other folklore, this Christmas being pertains more towards the ‘housewives’ of the family, obviously back in the day it pertained mainly to the women. It is said that Frau Perchta comes out on the eve of January 6th or Eve of The Epiphany to ‘inspect’ houses. Should she believe the house is not well-kept or in tidy shape, well, she’ll disembowel the head of the house (once again usually the woman) responsible for the mess. Nice. Love that.

Also known as the Nisse, the Tomten is known as a small gnome with a long white beard from Scandinavian folklore. It is said that during the winter months around Christmas, the Nisse folk come out and look over houses, homes, and farms. It is said that each home has one and their main focus tends to revolve around farms. Should the farm be in good care or the Tomten is treated well despite not being seen, the Tomten will protect the livestock. Should the farm fall to a lazy farmer or the Tomten is disrespected, Tomtens’ tempers run short. Angering a Tomten can lead to a strike to the ear or even the disappearance/killing of a farm’s livestock. Aka, be nice to the Nisse folk.

Probably one of the best-known antagonists of the Christmas season, Krampus originated in Central European folklore. Considered a hybrid of half-demon, half-goat, Krampus is described as a demon with hooves for feet, a long pointed tongue, sharp teeth, and two horns on top of his head. He, like many of the other legends listed above, is known to teach bad children a lesson through torture and fear. Americans are more well-acquainted with this legend thanks to the 2015 movie depicting the demon.

One Reply to “10 Christmas Urban Legends”