So now that we have a little bit of backstory behind both parties involved, let’s dive into that first harsh winter the Pilgrims endured.

So let’s first talk about some important information pertaining to winters in the Northeastern region of North America. It gets cold. Not only does it get well-below freezing temperatures at times, living on the coast (speaking from experience) causes the wind chills to be much more extreme. So lets think about this in terms of the Pilgrims.

The Pilgrims had just arrived to the New World by sea. It’s November and things are starting to get very cold. They have no houses or anywhere to keep warm besides the ship that carried them over. The ship that resides on the ocean with colder weather wind chills. 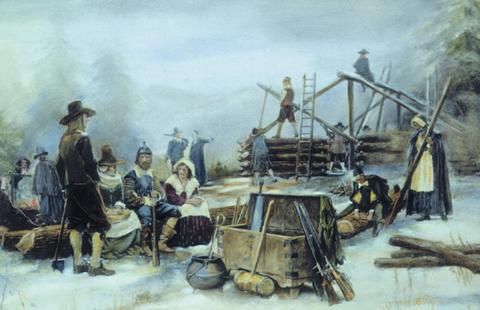 Come December the weather has only worsened. Historians of the time state that the snow storms were sporadic and challenging for the newcomers to deal with. In December, Pilgrim men set out to build a Common House in what is known as Plymouth today (They originally landed in modern day Provincetown) and due to the harsh winter conditions, the Common House also became living quarters.

With the conditions so harsh and the complete lack of preparedness on the Pilgrims part, forty-five people died. They died mainly due to the cold conditions as well as from illness that was cast upon the community from the surrounding temperature. Food was scarce

and had to be extremely rationed mainly due to the fact that nothing could be grown with the harsh conditions. Could you imagine living outside in New England during the winter without heat or even a stable roof over your head for half of it?

So what did the Native American’s do at this point? They knew of the newcomers existence like I discussed in my previous post. Although they did not interact with the Pilgrims, they always watched them from afar. Keeping mainly to the shadows, they would always keep an eye on the small community and track their every movement. They were very weary of interaction especially after stories of interactions between Natives and the Pilgrims’ Virginia counterparts.

So now that we have fully dove into why that first winter was so hard for the Pilgrims and dwindled their numbers severely, let’s get into how this idea of Thanksgiving fully came to be in the end.

2 Replies to “The Real History Behind Thanksgiving Pt. 3: That First Winter”