I grew up loving American Girl Dolls and basically everything they stood for. They were mainly revolved around Girl Empowerment and proof that throughout history, there have been girls who stood up for what they believed in. But, I honestly believe there are lessons that both girls & boys can learn from this brand that many people don’t even realize just how expansive it is. I decided to compile a list as to why I believe everyone should raise their kids with some aspect of American Girl Dolls in their lives. Don’t worry if you can’t afford a doll, there are plenty of other options out there to showcase this company’s message about empowerment.

10. They Don’t Have A Stick Thin Body 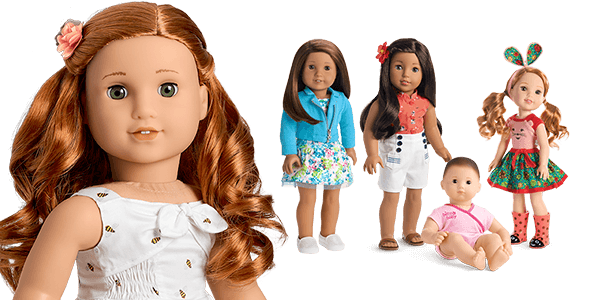 To start things off, I would just like to showcase the fact that American Girl Dolls don’t really have curves or defined features. They simply are just dolls that look like girls and are portrayed as such, no crazy tiny waistlines, disproportional features, just girls focusing on their talents and skills.

9. Their Dolls Are Extremely Diverse

Whether it is one of their historic dolls or a lookalike doll, American Girl offers a huge variety of skin types, hair textures, and facial features that allow for the dolls to epitomize the importance of diversity!

8. They Have Historical Characters

The main point of American Girl Dolls was the idea that each of the dolls had a unique backstory as well as a specific time period in which they came. The girls ranged from the 1700s-the present and usually had one specific talent that was showcased throughout their stories. I plan on doing a separate post showcasing each Historical Character Doll and what time period they came from and how it was important to our history today. The dolls ranged from Kaya, a native American living in the year 1764, to Julie Albright living in the year 1974 in the midst of the Hippy Era.

Each Historical Doll comes with a backstory, and with that comes with a lesson. American Girl finds a way to give historical facts and learning the hardship some went thought during different time periods, mixed in with an uplifting and vibrant atmosphere added to each girl’s life. From Addy, a slave girl who’s life is put on the line while trying to flee to the North, to Molly who’s family life is rattled from WWII.

6. Each Historic Doll Has Their Own Series 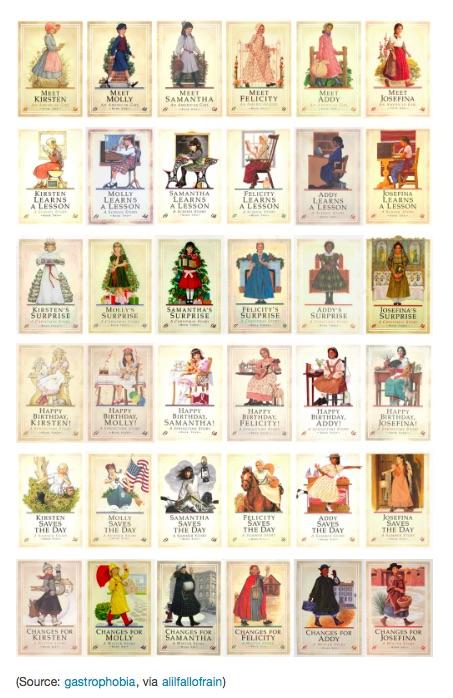 Originally all the Historic Dolls were the same, they each had a set of six books with similar topics that allowed kids to learn about different time frames throughout history and really understand how different life was in each era. Today, some girl dolls have more books than others depending on the topics they decide to cover. This also reverts back to my point about covering tough topics. For example, in one of Addy’s novels while she was still a slave on a plantation, she was forced to eat worms at the hand of her master because she was caught daydreaming while working. The great thing that I loved about these books though was each series ended with a Christmas celebration for the girls who celebrated the holiday. It was an amazing way to see how Christmas was celebrated during different time periods and it also led to a happy ending for all the girls and their families.

5. Certain Dolls Have Their Own Movies (With Some Star Studded Casts)

The only ones worth watching in my opinion are the older ones aka The Felicity Movie, The Samantha Movie, The Kit Movie, and The Molly Movie. The great thing about these movies is you get to see these time periods come to life and they follow along with the six book series each of the girls have. It yet again also does not stray from the difficult topics such as depicting Samantha’s young friend Nellie, who’s father passed away of illness and left her forced into child labor, working in a sewing factory where a girls hand is caught in the machine. Plus the star-studded cast adds a little extra thrill especially because many of the stars were just being discovered at the time of filming these movies! Stars such as Abigail Breslin as Kit, AnnaSophia Robb as Samantha, and Shailene Woodley as Felicity!

4. They Each Have A Friend With A Different Background

Each Historical Doll came with a best friend. Back in the day you were able to purchase these friends in doll form as well and they each came with their specialized stand-alone book. The cool thing about each friend is they portrayed an almost opposite lifestyle of the main girls. This then led to readers gaining a different perspective on the time period which is a great addition. For example Molly was a girl in the US during WWII, while Emily was a British refugee who came and stayed with her family for safety. Felicity was an american colonial girl whose family was a group of patriots, and her best friend Elizabeth came from an English family of loyalists. Every has a story.

3. The Dolls Adhere to Everyone

American Girl does their absolute best to match their dolls to every little girl (and now boys!) out there. This means they offer things such as bald dolls, dolls with casts, crutches and wheelchairs, as well as dolls with hearing aids and glasses! American Girl has also been recently known for sending girls dolls that match their bodies exactly, meaning dolls without an arm or leg to show girls that it doesn’t matter what obstacle you may face in life, your talent and personality will let you soar!

Each doll is known to have a talent that defied the odds of the that time period, even that of odds that still exist in today’s society. American Girls mission is to build strong individuals through showcasing strong dolls. The dolls talents range from smarts, sports and hobbies that go so far as space travel! They make it a goal that if a little girl somewhere has a dream, they want to have a doll with that dream and story as well to show anythings possible!

1. They Offer A Self-Care Book Line

American Girl likes to tackle obstacles girls may face in life while growing up in spectrum outside of the doll world as well! My first ever book about puberty and how to take care of your changing body was an American Girl Brand book that described everything in a way that made it easy to understand. Everyone in my grade had one. They also offer things like Smart Girl’s Guide Kits that cover topics such as Friendship Troubles, Fitness, Self-Love, Diverse Families, Drama and even hobby topics such as Cooking, Digital Design, etc.

Overall I would just like to say that I grew up with this brand, and it has expanded itself to be so much more than another line of dolls. I deeply believe in this brands message about empowering the younger generation to follow their dreams and honestly to this day I still stand by the American Girl brand.