Another great perk of being in the program is being around during special events! One special event I got to participate in was the RunDisney Dark Side 5k. RunDisney is a series of events that are held multiple times throughout the year. The events often include a 5K, 10K, Half Marathon, Kid Races, and more! Each RunDisney weekend holds a different theme and I was lucky enough to be there for their Star Wars races. The Dark Side was in desperate need of some new recruits to join their forces, but not just anyone is allowed to become part of this sinister team. In order to prove your worth and loyalty to the dark side you must go through “Stormtrooper boot camp” and run! I clearly couldn’t pass up the opportunity to work along side my good friends Kylo and Darth so I sold my soul online by signing up for the 5K months in advance. That would be my first piece of advice for anyone interested in doing a RunDisney race, you need to sign up well in advance to get a place in the event that you want!

In the days before the event a giant expo is held at the Wide World of Sports for race participants and their families to attend. The expo is where the participants will receive

their bib number as well as some cool free swag (including a free event t-shirt). After signing a race waiver and taking a participant photo, you are encouraged to explore the various stands. Stands within the expo sold various sports apparel, equipment, and food. Race attire and souvenirs could also be found here! My only warning is there was a line just to get into the RunDisney part of the expo so be ready to wait if you’re dying to get your hands on a dark side athletic shirt or RunDisney sneakers. So after some

wondering and watching some stormtroopers interrogate the new recruits, I went home and mentally prepared myself for the day ahead of me.

The reason I said I had to mentally prepare myself is because most of these races take place in the actual theme parks! But as you can probably assume, you can’t have guests wondering the parks while the race is going on. This means the races occur before the park opens to the general public. Which means be prepared to be up very very early! For my 5K we quite literally ran around the world! I got to wake up bright and early at 3:30am to get to the Epcot parking lot for 4:30am. After going to bed at midnight (clearly smart thinking on my part) saying how fun the event was going to be I really started questioning myself 3 1/2 hours later on why I chose to wake up that early to run but hey it’s half the fun right! The other thing I recommend which I didn’t do is dress up! When I arrived in the parking lot there were TONS of people decked out in Star Wars attire from both the light and the dark side! People really went all out for their costumes and it definitely added to the fun!

Once my friends and I arrived we were told that all racers are split into intervals depending on when you signed up so not all the runnings are running at once. While waiting for the race to begin at 5am, Disney has plenty of things to keep you occupied! First of all there is a line of characters to meet depending on the theme of the race! Since this one was Star Wars themed, there was a bunch of different characters, some you can’t meet anywhere else besides this event, available to meet and take photos! (Just be prepared to wait in mega lines for the exclusive characters) They also had a stage (lined with storm troopers of course) surrounded by large TVs with live announcers walking around showing off the best costumes they could find!

At 5am they announced that it was officially time to start boot camp and group A was off! Probably the only boring part was waiting for it to be your groups turn to start the run. When it was finally my turn and group D started to run it a beyond exciting experience. They have plenty of things along the way to help keep you energized! Cast members stand outside of their respective countries and cheer you one while holding up their country’s flag. Characters from before are stationed in certain areas where runners and stop and wait in line for a photo op. Photopass people are also stationed throughout the park snapping pictures of everyone! These pictures can be found and purchased by entering your bib number into the RunDisney website after the event! Plus who doesn’t get pumped up running to Imperial March music?? Watching the sunrise while running around the world in Epcot was definitely an experience I am lucky enough to say I was able to do and I highly recommend everyone to do at least one race during their DCP. For those of you who say “I’m not good at running” or “I’m not athletic,” trust me, anyone can do these races! They are designed to allow people to walk, run, crab crawl (whatever you want) and they also allow plenty of options for people to stop and rest before proceeding to the finish line.

When you finally make it to the end you are met with loud applause from the ChEAR team. These are guests who pay to attend the event but instead of running, they help out instead. This is another way to experience the race for people who don’t want to run! After the cheering you are handed a medal to show that you completed the challenge and are officially the newest stormtrooper in the Dark Side’s ranks. Medals differ 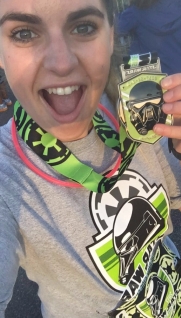 between the races; a lot of guests do multiple races so they can collect all the medals (I think I would collapse of exhaustion but hey good for them). You are then encouraged to once again wait in line to meet characters, take a finish line picture, and enjoy a food box filled with some energizing after-workout freebees. But I will warn you no matter how much energizing food or drinks you might consume after, you will be TIRED. I went back to my apartment and crashed on the couch for a solid three hours after this race but hey it was totally worth it! I made a small video to give my readers a glimpse of what a RunDisney race is like and hopefully it will encourage people to run one themselves! I will post the link below! Enjoy!