Welcome to Day 2 of my 31 days of Halloween here on my blog! Today is going to be dedicated to all those Disney Channel TV Halloween Specials I’d watch as a kid. Some were great, some were weird, and honestly, some were just downright scary! Let me know in the comments the moments you remember most from these iconic Halloween episodes!

Gotta love a good Halloween rendition of the noodle dance. 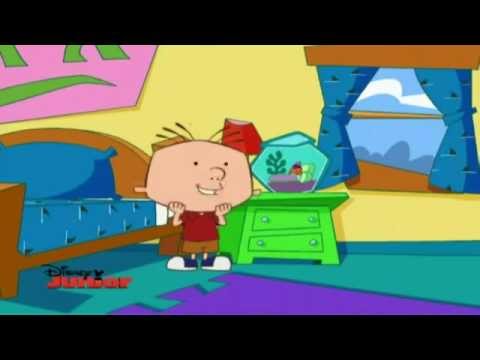 DOES ANYONE ELSE REMEMBER THE HALLOWEEN SONG THE CAT AND DOG SANG IN THIS EPISODE!? ABOUT WHAT THEY COULD BE FOR HALLOWEEN? NO? JUST ME? Well then I got NEWS for you! You missed the heck out on your childhood and you better be YouTubing this ish right now.

My mom still tears up every time someone mentions Bear In The Big Blue House. I mean lets be real, who could say no to a giant fluffy talking bear who said goodnight to Luna the moon every day. Great stuff.

He’s small and short and round (I think that was the words). Rolie Polie Olie was one of my all time favorites as a kid and this Halloween episode is still in my head! Clearly shows it was a great show if I still remember them roaming through a Halloween maze.

The. BEST. House of Mouse twist next to the snowed in for Christmas one. I lived for the House of Mouse and would race home every day after school to watch it, but this mini movie in particular is one I would always get from Blockbuster when it was there.

I don’t remember much about this episode but for some reason I remember the creepy villain dude.

I just loved everything about Phil of the Future. Can we also talk about the time he pretended to believe in aliens to get a kid to not realize he was

Never watched this episode as a kid and probably with good reason. Knowing young me, I probably wouldn’t have slept for a week.

I really didn’t understand why Kim panicked when her robot butt-kicking super suit was coming through her actual princess Halloween costume. Like cyborg princess has a nice ring to it if you ask me. I get it though when anything goes wrong it the eyes of your crush it’s like the world’s crumbling down. At least in the end she does her usual butt-kicking, day saving routine.

This episode was odd, but funny as always. Basically the Russo’s are told their haunted house is lame every year so Alex takes it upon herself to get some real ghosts involved in the charade. Next thing ya know the ghosts become too much and cause the Russo Haunted House to be shut down anyways, the reason being? It was too scary!

HANNAH HAS AN EVILLLL COUSIN. Yet no one actually believes her when she says shes evil! When Miley’s southern cousin comes to visit, she decides its her time to shine in the limelight by tying Miley up and attending a Halloween party as Hannah Montana. She also has a huge crush on Oliver which ends up being her dastardly downfall!

I still think to this day I have never seen the full episode. It was just so creepy to me as a kid especially when the Day of the Dead dolls came to life and Lizzie was possessed.

I don’t understand what part of this terrified me so much, but I think it was mainly how Raven and Chelsea looked when they started to transform into a cow. Now for those of you wondering what on earth was going on here, basically Raven uses an old family ritual to give her and Chelsea ‘the best’ Halloween costumes possible for the Halloween dance. But apparently that ‘costume’ spell ended up turning them into actual cows because one of Chelsea’s “save the cows” buttons fell into the potion.

If this episode didn’t give you the creeps after, you clearly are immune to fear (or a psychopath we don’t know). The entire basis of this episode was that the Suite Life crew decided to give Zack & Cody a taste of their own medicine by pranking them into believing one of the hotel rooms was super haunted. Turns out? It actually is in the end but only Zack & Cody discover that when they’re alone in the room.